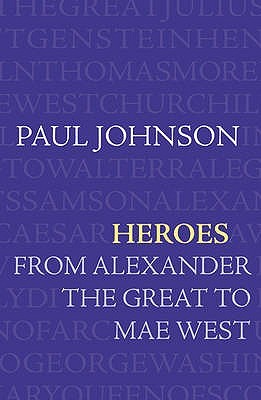 Heroes: From Alexander the Great to Mae West

A galaxy of legendary figures from the annals of Western history comes to life in this stirring sequel to Intellectuals and Creators.
In this enlightening, entertaining work, Paul Johnson continues his engaging history series, approaching the subject of heroism with stirring examples of men and women from every age, walk of life and corner of the world who have inspired and transformed not only their own cultures but the whole world as well.
Heroes includes Samson, Judith and Deborah; Alexander and Julius Caesar; Henry V and Joan of Arc; Thomas More, Lady Jane Grey, Mary Queen of Scots; Elizabeth I and Walter Raleigh; George Washington, the Duke of Wellington and Lord Nelson; Emily Dickinson; Abraham Lincoln and Robert E. Lee; Winston Churchill and Charles de Gaulle; Mae West and Marilyn Monroe; and Ronald Reagan, Margaret Thatcher and Pope John Paul II.

The Falcon Thief: A True Tale of Adventure, Treachery, and the Hunt for the Perfect Bird

The Greatest Minds and Ideas of All Time

The Tao of Pooh by Benjamin Hoff | Conversation Starters

The Great Influenza: The Story of the Deadliest Pandemic in History

Murdered Midas: A Millionaire, His Gold Mine, and a Strange Death on an Island Paradise

Heroes: From Alexander the Great to Mae West Reviews

Paul Johnson works as a historian, journalist and author. He was educated at Stonyhurst School in Clitheroe, Lancashire and Magdalen College, Oxford, and first came to prominence in the 1950s as a journalist writing for, and later editing, the New Statesman magazine. He has also written for leading newspapers and magazines in Britain, the US and Europe.