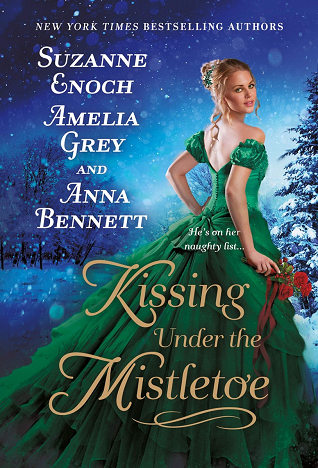 Kissing Under the Mistletoe

In GREAT SCOT by Suzanne Enoch, Jane Bansil knows she will never have a fairy-tale life. But even at three-and-thirty and well past marriageable age, though, she has to admit that the architect the MacTaggerts have hired could turn even a confirmed spinster’s head.

In CHRISTMAS AT DEWBERRY HOLLOW by Amelia Grey, Isabelle Reed has no plans to ever fall in love. Certainly not with Gate, a man who doesn’t live in Dewberry Hollow. She will fulfill her duty and help him keep his promise to have his ill grandfather back in London in time for Christmas dinner. The last thing Isabelle wants is for Gate to take her heart with him when he goes.

In MY MISTLETOE BEAU by Anna Bennett, Miss Eva Tiding is determined to cheer her widowed father with the perfect Christmas gift. Even if it means breaking into the home of the rakish earl who swindled Papa out of his pocket watch and pretending to date the earl for the Christmas season.

It's Getting Scot in Here (Wild Wicked Highlanders, #1)

Girls Before Earls (Rogues to Lovers, #1)

The Duchess Hunt (Once Upon a Dukedom, #2)

When You Wish Upon a Duke (Awakened by a Kiss, #2)

Home for a Cowboy Christmas

When a Duke Loves a Governess (Unlikely Duchesses, #3)

All Night Long with a Cowboy (Kittredge Ranch, #2)

Kissing Under the Mistletoe Reviews

Suzanne was born in Southern California sometime in the latter half of the 20th century. In the way that some people are born knowing they want to be astronauts or cellists, Suzanne always knew she wanted to be a writer. Early dreams of becoming a zoologist and writing true stories about her adventures in Africa were crushed, however, after she viewed a television special about the world’s most po