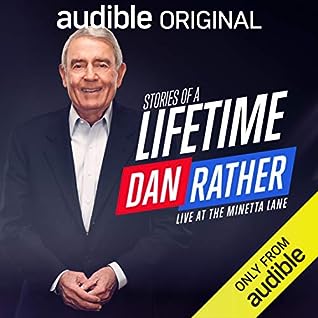 Dan Rather: Stories of a Lifetime

Tales from the front lines of 60 years of television.

Emmy Award winner and former CBS News anchor Dan Rather brings his unforgettable staged performance, Stories of a Lifetime, to the Minetta Lane Theatre, where it will be recorded live for Audible Theater. In this deeply personal show, the legendary Peabody Award-winning journalist takes audiences through the most pivotal moments of his life, from surviving a debilitating illness as a child in Depression-era Texas to covering monumental moments in American history such as the Civil Rights movement, the assassination of JFK, and Watergate. An intimate evening of candid commentary, memories, and laughter, Stories of a Lifetime is a celebration of the power of a free press and reminder of why it’s more important now than ever.

Readers Also Enjoyed Dan Rather: Stories of a Lifetime

When You Finish Saving the World

King of Sting: The Story of Australian Conman Peter Foster. An Audible Original

The Pursuit of Healthiness with Blake Griffin

Dan Rather: Stories of a Lifetime Reviews

With a famed and storied career that has spanned more than six decades, Dan Rather has earned his place as one of the world’s best-known journalists. He has interviewed every president since Eisenhower and, over that time, personally covered almost every important dateline in the United States and around the world. Rather joined CBS News in 1962. He quickly rose through the ranks, and in 1981 he a