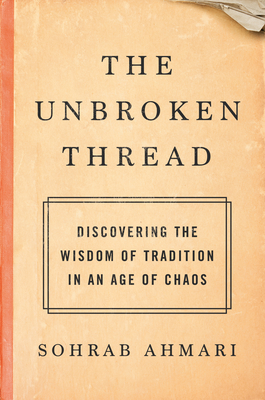 The Unbroken Thread: Discovering the Wisdom of Tradition in an Age of Chaos

We've pursued and achieved the modern dream of defining ourselves--but at what cost? The New York Post op-ed editor makes a compelling case for seeking the inherited traditions and ideals that give our lives meaning.

As a young father and a self-proclaimed “radically assimilated immigrant,” opinion editor Sohrab Ahmari realized that when it comes to shaping his young son's moral fiber, today's America comes up short. For millennia, the world's great ethical and religious traditions taught that true happiness lies in pursuing virtue and accepting limits. But now, unbound from these stubborn traditions, we are free to choose whichever way of life we think is most optimal — or, more often than not, merely the easiest. All that remains are the fickle desires that a wealthy, technologically advanced society is equipped to fulfill.

The result is a society riven by deep conflict and individual lives that, for all their apparent freedom, are marked by alienation and stark unhappiness.

In response to this crisis, Ahmari offers twelve questions for us to grapple with — twelve timeless, fundamental queries that challenge our modern certainties. Among them: Is God reasonable? What is freedom for? What do we owe our parents, our bodies, one another? Exploring each question through the life and ideas of great thinkers, from Saint Augustine to Howard Thurman and from Abraham Joshua Heschel to Andrea Dworkin, Ahmari invites us to examine the hidden assumptions that drive our behavior and, in so doing, to live more humanely in a world that has lost its way.

“[The Unbroken Thead] merits attention . . . because Ahmari is a notable combatant in the fight on the American right for the future of conservatism.”
—The New York Times

“A vital and provocative read. . . . Designed to satisfy the curiosity of those wondering whether there is more to life than rootless independence, The Unbroken Thread is an easy read, while still meaty enough to reward those already sympathetic to tradition’s insights. . . . Studded with little gems of historical and philosophical intrigue.”
—The Telegraph

“[Ahmari] is a master storyteller. . . . Readers of Sohrab Ahmari’s new book will be grateful to him for reminding us of how serious the loss [of our traditions] could turn out to be.”
—First Things

“Ahmari provides us — and his son — with examples of lives well-lived, lives that affirm the necessity, vitality, and authority of particular claims of traditional wisdom. His hostility to liberalism is not hard to find; the questions he explores are in themselves defiant of the false modesty, agnosticism, and relativism that saturate our 'liberal' age. And yet even those who reject Ahmari’s categories and conclusions will still admire and be edified by the stories he has to tell.”
—National Review

“Ahmari proposes a path out of the chaos in our culture today, discerning the reasons of the heart and promoting moral excellence. He frames the questions we all need to ponder and identifies many topics that families and religious leaders need to address — the sooner, the better.”
—The New Criterion

“Ahmari’s prose is always clear, and he manages to articulate sophisticated arguments without ever sounding academic or getting lost in minutia.”
—Washington Examiner

“The Unbroken Thread will be of great service to Americans who have been deprived of their moral and philosophical inheritance by a shallow educational establishment. . . . Ahmari introduces a generation (and more) to the spiritual patrimony of which they have been robbed. And he does it in the gentlest way possible, knowing its riches may dazzle eyes that have too long alighted on only the rusted scrap of utilitarian liberalism.”
—Spectator USA

“The urgent need for this work cannot be doubted. For as Ahmari concludes his reflections, the social trends that fill parents like him with unease also come into sharper focus.”
—National Catholic Register

“The quality that makes [Ahmari] a valuable thinker for our current moment is the same one that made him write this book in the way that he did: his willingness to take risks.”
—City Journal

“Honestly, if there were another hundred Sohrab Ahmaris, or even just a dozen, the Church in the US would be transformed. . . . [A] humane and combative book.”
—The Catholic Herald

“Intriguing and insightful. . . . The Unbroken Thread is clearly the result of wide reading and reflection. . . . While Ahmari’s arguments are easy to read, copying and sending them to your older children is even easier.”
—Catholic World Report

“Although Ahmari is gentle with the reader, his aim is daring. He seeks nothing less than to build a city of heroes. . . . [His] verve and punchy style will make any educated reader rethink or think more about our society’s shaky foundations. Better yet, it might even make a saint or two.”
—The University Bookman

“The Unbroken Thread is a most welcome invitation to take both wisdom and tradition seriously again, to see in tradition an indispensable vehicle for conveying and sustaining wisdom about the things that truly matter. In that regard, Ahmari’s very fine book is profoundly countercultural.”
—The Public Discourse

“The book recalls . . . C.S. Lewis's Mere Christianity, a guide for the skeptical everyman to the traditionalist's position.”
—The Washington Free Beacon

“The Unbroken Thread is simply tradition issuing a series of reminders to Western liberalism. And yet we’d be remiss if we didn’t attend closely to the conceptual contours traced by Ahmari’s highly readable book.”
—Human Events

“The Unbroken Thread is an achievement in scholarship, journalism, and entertainment. . . . If you’re feeling 'exhausted' or just looking for refreshment and renewed energy, read The Unbroken Thread.”
—The Catholic Thing

“The Unbroken Thread is persuasive because it is a father’s working-out of a vision worth imparting to his child. Ahmari’s love for his son is a gateway to the book’s universal concerns.”
—Arc Digital

“With The Unbroken Thread, New York Post op-ed editor Sohrab Ahmari has given us a beautifully written book that makes classical and Christian thought intelligible, relevant, and attractive to contemporary readers.”
—Providence Magazine

“Ahmari is speaking to all of us as the children we are, appealing to our reason, as well as to our eternal selves. He petitions that part of us that, like children, reaches out to the sky, the universe, the heavens, and pleads for some glimpse of true meaning. We beggars at the altar of mercy have tried everything we could think of, have indulged in every kind of fulfillment, prioritized every pursuit, and still none of them can equate to the glory of God's love.”
—The Post Millennial

“Ahmari’s eminently readable book is a rediscovery of time-tested wisdom.”
—The Daily Signal

“The Unbroken Thread is not a polemic; it is an intellectual journey told as a series of cozy, fireside chats. . . . It satisfies what the late critic Harold Bloom considered the reader’s strongest, most authentic motive: 'the search for a difficult pleasure.’ ”
—The Imaginative Conservative

“While Ahmari’s new book is certainly well-written, it does not leave readers feeling comfortable. Instead, it challenges readers, conservative and progressive alike, to examine not just their opinions but their habits — and those of their civilization. . . . It is both poignant and edifying.”
—The European Conservative

“Ahmari deftly blends history, biography, and philosophy to propose answers to the questions he sets himself.”
—Semiduplex

“Sohrab Ahmari offers more than a vivid and learned defense of traditionalism. With fatherly love, he leads his son—and us—on a fearless consideration of life’s big questions, taking thinkers of many historical times and circumstances as interlocutors. Along the way, he recovers truths about the nature and flourishing of the human person—truths seemingly in danger of being forgotten in our contentious and uncertain times.”
—Timothy Cardinal Dolan, Archbishop of New York

“Ahmari’s tour de force makes tradition astonishingly vivid and relevant for the here and now. Only a writer with Ahmari’s intellect, his audacious commitment to faith and reason, and a journalist’s gift for storytelling could have pulled this off.”
—Rod Dreher, bestselling author of Live Not by Lies and The Benedict Option

“A serious—and seriously readable—book about the deep questions that our shallow age has foolishly tried to dodge.”
—Douglas Murray, bestselling author of The Madness of Crowds and The Strange Death of Europe

“As having a child instantly teaches us, it’s no longer about you. Ahmari uses his personal experience, but then broadens out to draw on wisdoms of all ages and faiths. He jars us out of our selfie-obsessed world with the clear message that commitment to faith, to others, and to humanity is actually the most liberating existence of all.”
—Martha MacCallum, anchor, The Story on Fox News, and author, Unknown Valor: A Story of Family, Courage, and Sacrifice from Pearl Harbor to Iwo Jima

“In this fascinating book, Sohrab Ahmari eloquently articulates what many American Founders understood and the French revolutionaries forgot: that faith is essential for freedom to truly flourish, and that we abandon the wisdom of the past at great peril to our future. Traditional Jews, Christians, and all who care about the future of the West are in his debt.”
—Rabbi Meir Soloveichik, director, Straus Center for Torah and Western Thought, Yeshiva University

“In a time of widespread confusion and uncertainty about the meaning of life, Sohrab Ahmari makes a strong case for the truth and relevance of traditional values, virtues, and beliefs. This is a unique and hopeful book that reminds us that the human person is made for great and beautiful things — far more than the vision of life offered by our society today.”
—Most Reverend José H. Gomez, Archbishop of Los Angeles

“Drawing on the deepest wells of ancient and modern wisdom from around the world, The Unbroken Thread weaves together essential lessons desperately needed to guide a new generation into an uncertain future. Written with love as a legacy for his young son, Sohrab Ahmari has produced a gift for all of us.”
—Patrick J. Deneen, professor of political science, University of Notre Dame, and author of Why Liberalism Failed

“Sohrab Ahmari has been thinking for himself since arriving from Iran as a youth. Paradoxically, he has thought himself back into the heart of our best traditions and has seen, with striking clarity, that the modern quest for total liberation of the intellect and will is both quixotic and damaging, individually and collectively. This clever and engaging work is the result; the dozen questions it asks are fresh, and the answers it gives are powerfully persuasive.”
—Adrian Vermeule, Ralph S. Tyler, Jr. Professor of Constitutional Law, Harvard Law School

Readers Also Enjoyed The Unbroken Thread: Discovering the Wisdom of Tradition in an Age of Chaos

The Adventures of Huckleberry Finn

Twice in a Blue Moon

The City We Became (Great Cities #1)

The Unbroken Thread: Discovering the Wisdom of Tradition in an Age of Chaos Reviews

Sohrab Ahmari is the op-ed editor of the