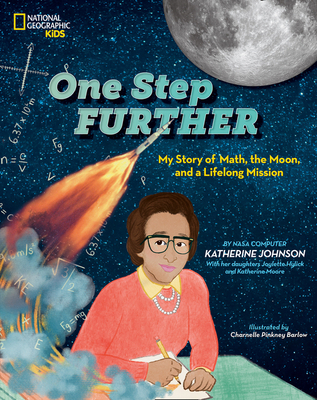 One Step Further: My Story of Math, the Moon, and a Lifelong Mission

This inspirational picture book reveals what is was like for a young black mother of three to navigate the difficult world of the 1950s and 60s and to succeed in an unwelcoming industry to become one of the now legendary "hidden figures" of NASA computing and space research.


Johnson''s own empowering narrative is complemented by the recollections of her two daughters about their mother''s work and insights about how she illuminated their paths, including one daughter''s fight for civil rights and another''s journey to become a NASA mathematician herself. The narrative gracefully weaves together Johnson''s personal story, her influence on her daughters'' formative years, her and her daughters'' fight for civil rights, and her lasting impact on NASA and space exploration. Filled with personal reflections, exclusive family archival photos, and striking illustrations, readers will be immersed in this deeply personal portrayal of female empowerment, women in STEM, and the breaking down of race barriers across generations. Historical notes, photo/illustration notes, and a time line put the story into historical and modern-day context.


The inspirational tale of Johnson''s perseverance is both intimate and global, showcasing the drive of each generation to push one step further than the last. With its evocative family album-style format and novel approach to storytelling, One Step Further is sure to inspire the next generation of rising stars.

Readers Also Enjoyed One Step Further: My Story of Math, the Moon, and a Lifelong Mission

The Oldest Student: How Mary Walker Learned to Read

The Tree Lady: The True Story of How One Tree-Loving Woman Changed a City Forever

What Was Pearl Harbor?

Where Is the Bermuda Triangle?

Who Was Jackie Robinson?

One Step Further: My Story of Math, the Moon, and a Lifelong Mission Reviews

Silver Wedding Tempest in Eden Mesilas Yesharim: The Path of the Just Good to Be Grand: Making the Most of Your Grandchild’s First Year Murder on the House Gertrude, Gumshoe Cozy Mystery Series Box Set: Books 1, 2, and 3 Somebody Like You Grandma Moses Bad Boys Game Extinction Lost

Katherine Johnson is a former NASA mathematician whose work was critical to the success of many of their initiatives, including the Apollo Lunar landing program and the start of the Space Shuttle program. Throughout her long career she has received numerous awards, including the nation’s highest civilian award, the Presidential Medal of Freedom, from President Barack Obama.