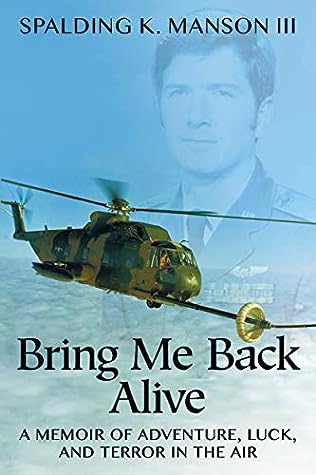 Bring Me Back Alive: A Memoir of Adventure, Luck, and Terror in the Air

Young men dream about flying and the mastery of complex machines and imagine fanciful tales of heroics in high performance aircraft. Most of us know deep down inside that those fanciful tales will likely never happen. But sometimes they do. These 30+ stories (as unbelievable as some of them appear) actually happened. They cover a six year period during the Vietnam War era and conclude with a stunning year in Jolly Green Giant rescue helicopters. A major character in the chapters on rescue helicopters is a PJ (para-jumper) CMSGT Duane Hackney who is still by far the most decorated Airmen in the history of the US Air Force with seventy individual citations for valor in combat. Duane and I flew together on many missions and each was convinced that the other was the luckiest person we knew. Our luck encompassed garnering 80% of the truly exciting missions during that year as well as extricating ourselves from impossible situations. In one of the last chapters we encounter a giant wave that totally submerged our helicopter while we were floating on the open ocean during a rescue mission -- yet we survived and flew it back. I have never met another rescue pilot who believes that we could have survived such an encounter.

Readers Also Enjoyed Bring Me Back Alive: A Memoir of Adventure, Luck, and Terror in the Air

A Bullet Through the Helmet: A Vietnam Dustoff Pilot's Memoir

Into the Belly of the Beast: One Man's Year in the Vietnam War

This is Minuteman: Two-Three... Go!: Memoirs of a Helicopter Pilot in Vietnam, Iraq, and Afghanistan

Mayhem 337: Memoir of a Combat Advisor in Afghanistan

The Aviators: Stories of U.S. Army Helicopter Combat in the Vietnam War, 1971-72

Taking Fire!: Memoir of an Aerial Scout in Vietnam

Mongoose Bravo: Vietnam: A Time of Reflection Over Events So Long Ago