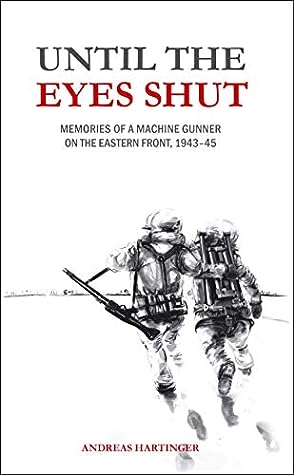 Until the Eyes Shut: Memories of a machine gunner on the Eastern Front, 1943-45

The veteran tells his grandson about his World War II experiences, without pathos, but with gripping, brutal honesty.

What awaits the reader:

“Deeply shocked and heartbroken, we continued on our way back. I had had enough. Enough of the killing. Enough of the dying. In the eyes of the Alsatian I saw a question I was also asking myself. When would this terrible war come to an end, the cannons fall silent, the armories shut down? When would we finally be able to return to life instead of crawling, slaying, and destroying?”

“He lived through the whole day and finally died the following night. During this time, he kept calling for help. Just before he died, he thought he saw his mother and calmed down a bit. I rested my hand on his shoulder. I did not want him to die alone. He finally left our world with his eyes wide open and his hands pressed over his intestines.”

“My baptism of fire was the most incisive event of my life. Nothing was ever going to be the same. My youthful carefreeness had vanished under the impact of dread and orchestrated mass destruction.”

The rulers’ mistakes are paid for with the blood of the people. This is shown in history both recent and ancient, time and time again. It was no different for an Austrian mountain farmer’s son who was thrown into the carnage of the Eastern Front. He was in the prime of his youth, and the German Reich was already close to losing the war.

In ripe old age, he remembers those dark hours that have haunted him throughout his life. Manning his machine gun in merciless struggles with a superior enemy, or fighting for survival in brutal close combat, reduced to basest instincts. He also remembers the rock-solid comradeship with his mountain troop, the unexpected gestures of humanity, and an insane destructiveness at a time when the world was out of joint.

This ruthless, honest, and touching real-life account of a simple frontline soldier serves as a reminder to stand up for peace at all times, and to despise war. Until the eyes shut …

Andreas Hartinger had a profound interest in contemporary history from a young age. During his professional assignments in various crises around the world, he has seen with his own eyes how war takes humanity hostage. He and his grandfather Hans Kahr wrote down the elder’s war memories together. It was painstaking work and it involved innumerable unsettling conversations. What started off as a family project is now available for the world to witness.

Readers Also Enjoyed Until the Eyes Shut: Memories of a machine gunner on the Eastern Front, 1943-45

The Coastwatchers (Illustrated): Operation Ferdinand and the Fight for the South Pacific

My Life in the Red Army (Annotated)

Sniper on the Eastern Front: The Memoirs of Sepp Allerberger Knights Cross

Blood and Soil: The Memoir of A Third Reich Brandenburger

The Grey Goose of Arnhem: The Story of the Most Amazing Mass Escape of World War II

Panzer Ace: The Memoirs of an Iron Cross Panzer Commander from Barbarossa to Normandy

Voices of the Waffen SS

At Leningrad's Gates: The Combat Memoirs of a Soldier with Army Group North

Where Away: A Modern Odyssey

The Last Panther - Slaughter of the Reich - The Halbe Kessel 1945

Until the Eyes Shut: Memories of a machine gunner on the Eastern Front, 1943-45 Reviews