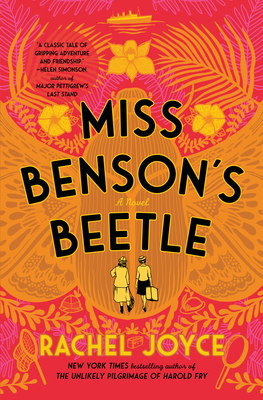 She's going too far to go it alone.

It is 1950. London is still reeling from World War II, and Margery Benson, a schoolteacher and spinster, is trying to get through life, surviving on scraps. One day, she reaches her breaking point, abandoning her job and small existence to set out on an expedition to the other side of the world in search of her childhood obsession: an insect that may or may not exist--the golden beetle of New Caledonia. When she advertises for an assistant to accompany her, the woman she ends up with is the last person she had in mind. Fun-loving Enid Pretty in her tight-fitting pink suit and pom-pom sandals seems to attract trouble wherever she goes. But together these two British women find themselves drawn into a cross-ocean adventure that exceeds all expectations and delivers something neither of them expected to find: the transformative power of friendship.

The Two Lives of Lydia Bird

The Boy from the Woods

Red Hood Nancy Drew: Girl Detective: #1-4 Destined For The Drakari Warlords Secrets of Silvergum The Wild Woman's Way: Unlock Your Full Potential for Pleasure, Power, and Fulfillment The Crystal Code: How to Harness Positive Energy, Embrace Success and Transform Your Life Caught Together BEAUTY QUEEN: Crossdressing, Feminization A Conspiracy of Wolves The Bear and the Nightingale

Rachel Joyce has written over 20 original afternoon plays for BBC Radio 4, and major adaptations for both the Classic Series, Woman's Hour and also a TV drama adaptation for BBC 2. In 2007 she won the Tinniswood Award for best radio play. She moved to writing after a twenty-year career in theatre and television, performing leading roles for the RSC, the Royal National Theatre, The Royal Court, and