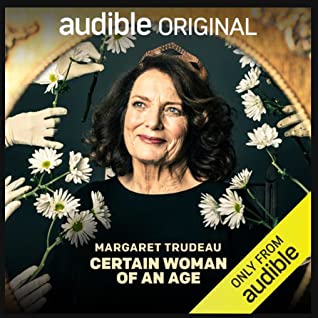 Certain Woman of an Age

Margaret Trudeau, former wife of Canada’s 15th Prime Minister, Pierre Trudeau, and mother of Canada’s current Prime Minister, Justin Trudeau, opens up with refreshing candor in her one-woman show, Certain Woman of an Age, the compelling true story of one of the world's most fascinating figures. Through vividly told public and private anecdotes, the Audible Original weaves a raw and revealing journey of motherhood, loss, mental illness, and feminism. Co-written with Alix Sobler and directed by Kimberly Senior, Certain Woman of an Age is "fearless and vulnerable" (Chicago Tribune).

International mental health advocate Margaret Trudeau brought her intimate solo performance, Certain Woman of an Age, to the Minetta Lane Theatre, where it was recorded live for Audible Theater.

A Woman of the World

The Life and Times of Prince Albert

Dan Rather: Stories of a Lifetime

Exit Interview with My Grandmother

The Mountain and the Sea

Inside Jobs: Tales from a Time of Quarantine

Certain Woman of an Age Reviews

Margaret Joan Trudeau (née Sinclair, formerly Kemper; born September 10, 1948) is a Canadian author, actress, photographer, former television talk show hostess, and social advocate for people with bipolar disorder, with which she is diagnosed. She is the former wife of Pierre Trudeau, 15th Prime Minister of Canada; they divorced in 1984, during his final months in office. She is the mother of Just