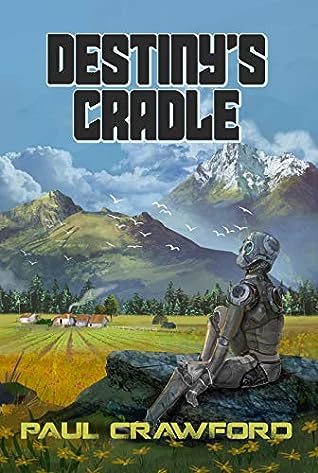 Teenagers Ben Canterbury and Tessa Nyera are harvesting cotton on a warm afternoon when a hole opens up in a nearby meadow—like the doorway to another dimension. The hole disgorges a naked man, barely conscious and clutching a human leg bone, and then vanishes. Even more astonishing to Ben and Tessa, this man is a stranger to them and, in their close-knit world, no one has ever seen a stranger before.

When he recovers, that stranger, Thomas Morgan, finds himself trapped in a small rural community where everyone regards him with bewildered awe. He alone knows they are inside the earth-like biosphere of an immense starship, The Destiny, on a thousand-year voyage to colonize a distant planet. While he had been in cryogenic hibernation, Ben, Tessa, and the others in this rustic community appear to be descendants of a small ‘wake’ crew that was originally charged with maintaining the ship's operating systems.

Clearly something happened, long ago, that upset the carefully laid plans of the starship's designers, a crisis, now long forgotten, that left the wake crew and its descendants trapped for generations within the biosphere, its exits locked and its walls, shielded by a holographic force field, invisible to everyone inside.

Soon, Tom Morgan finds himself struggling, with the help of Ben and Tessa, to prevent a disastrous conflict between the simple farmers born in the biosphere and their technologically-advanced ancestors, now emerging from cryo and led by Tico Calder, the starship’s arrogant and ruthless captain. To succeed, he must discover the cause of the crew's entrapment, including the role played by Agatha, an enigmatic young computer prodigy who lived hundreds of years earlier. He must also deal with the threat posed by Dante, a sentient robot of unknown origin, who has secretly controlled The Destiny for centuries and has the crew's fate, though not necessarily its best interests, in its unpredictable hands. And, finally, Tom and his young friends must face what's awaiting them on the bewildering planet below, for the massive starship has finally reached its destination.

DESTINY'S CRADLE is a stand-alone hard science fiction novel, with a complex, scientifically plausible setting, well-drawn characters, and an intricate, thought-provoking plot. It is set a world riven by conflict and distrust, a world in which the fate of humanity rests on the shoulders of just a handful of individuals.

Starman's Saga: The Long, Strange Journey of Leif The Lucky

The Reality Contagion: A Horror Story (The Shattered God Mythos) A Christian Ending: A Handbook for Burial in the Ancient Christian Tradition العرب في ريف مصر وصحراواتها Christmas Secrets at Villa Limoncello (Tuscan Dreams #3) The Best-Laid Plans Win Paid Advertising: The Unconventional Marketer พันสารท เล่ม 2 S is for Space Dared by a Dangerous Man Make Time: How to Focus on What Matters Every Day

Paul Crawford is a science fiction author currently living in Ann Arbor, Michigan. He served as a U.S. Foreign Service Officer for 33 years, promoting agriculture and natural resources programs throughout Africa and Latin America, as well as in Afghanistan.