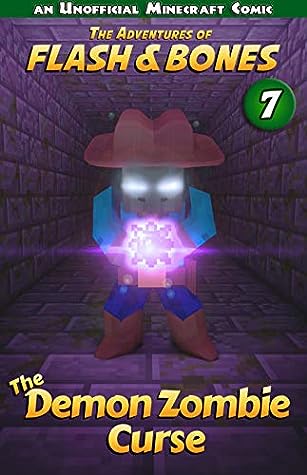 (This used to be Episode 8, but we combined two earlier comics and shifted the numbers. The old Episode 8, on a different account, is still up on Amazon and we’re trying to take it down)

Bones has been completely taken over by a strange unimaginable power.

Flash must flee with Angel, searching the secret stronghold for the first ingredient required by Leetah the witch.

Not only is it the first of the three ingredients for Leetah, but it might also hold the secret to freeing Bones from the demon power controlling his mind.

But they aren't the only ones searching for this powerful artifact.

Zulk, the zombie mercenary, and his henchmen also want it for reasons of their own, and the stronghold itself is filled with all kinds of other monsters ready to attack.

Will the mysterious artifact cure the demon zombie curse affecting Bones? Can they avoid Zulk and his henchmen and make it back before Bones is permanently changed into a being of evil?

Are you looking for where to find Minecraft books? Check out these fun comics for kids 9-12 that love Minecraft!

This top Minecraft books series has over 100 fully illustrated comic pages per comic and a FREE text version for each!

If you want your kids to beg you to let them read, then why not get them something they already enjoy? These Minecraft unofficial books for kids are just the thing you need.

Are you looking for great zombie books to read? These Minecraft adventure comics take the Minecraft Herobrine story and turn it into an exciting new tale!

Follow our new hero Flash and his companion, a Minecraft villager named Bones, on their adventure to defeat Herobrine!

Diary of a Surfer Villager: Book 20: (an unofficial Minecraft book for kids)

The Ballad of Winston the Wandering Trader, Book 5: (an unofficial Minecraft series)

Diary of a Surfer Villager: Book 18: (an unofficial Minecraft book for kids)

The Quest for the Obsidian Pickaxe 3: Parrot Pandemonium (An Unofficial Minecraft Book)

The Quest for the Obsidian Pickaxe 2: Never Say Nether (An Unofficial Minecraft Book)