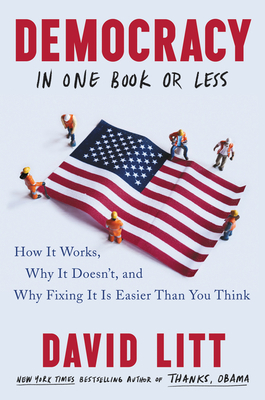 Democracy in One Book or Less: How It Works, Why It Doesn’t, and Why Fixing It Is Easier Than You Think

Bill Bryson meets Thomas Frank in this deeply insightful, unexpectedly hilarious story of how politicians hijacked American democracy and how we can take it back

The democracy you live in today is different—completely different—from the democracy you were born into. You probably don't realize just how radically your republic has been altered during your lifetime. Yet more than any policy issue, political trend, or even Donald Trump himself, our redesigned system of government is responsible for the peril America faces today.

What explains the gap between what We, the People want and what our elected leaders do? How can we fix our politics before it's too late? And how can we truly understand the state of our democracy without wanting to crawl under a rock? That's what former Obama speechwriter David Litt set out to answer.

Poking into forgotten corners of history, translating political science into plain English, and traveling the country to meet experts and activists, Litt explains how the world’s greatest experiment in democracy went awry.

(He also tries to crash a party at Mitch McConnell’s former frat house. It goes poorly.)


The result of Litt's journey is something you might not have thought possible: a page-turner about the political process. You'll meet the Supreme Court justice charged with murder, learn how James Madison's college roommate broke the Senate, encounter a citrus thief who embodies what's wrong with our elections, and join Belle the bill as she tries to become a law (a quest far more harrowing than the one in Schoolhouse Rock!).

Yet despite his clear-eyed assessment of the dangers we face, Litt remains audaciously optimistic. He offers a to-do list of bold yet achievable changes—a blueprint for restoring the balance of power in America before it's too late.

Readers Also Enjoyed Democracy in One Book or Less: How It Works, Why It Doesn’t, and Why Fixing It Is Easier Than You Think

By the Shores of Silver Lake (Little House, #5)

All My Mother's Lovers

Redlined: A Memoir of Race, Change, and Fractured Community in 1960s Chicago

Democracy in One Book or Less: How It Works, Why It Doesn’t, and Why Fixing It Is Easier Than You Think Reviews

David Litt entered the White House as a speechwriter in 2011, and left in 2016 as a senior presidential speechwriter and special assistant to the president. In addition to writing remarks for President Barack Obama on a wide range of domestic policy issues, David served as the lead joke writer for several White House Correspondents’ Dinner monologues. Since leaving government, David has written sp