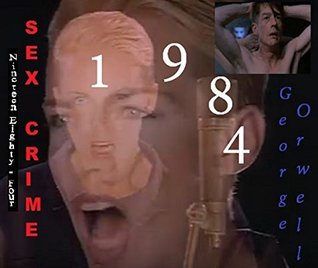 Nineteen Eighty-Four, often published as 1984, is a dystopian novel published in 1949 by English author George Orwell. The novel is set in Airstrip One, formerly Great Britain, a province of the superstate Oceania. Oceania is a world of perpetual war, omnipresent government surveillance and public manipulation. Oceania's residents are dictated by a political regime euphemistically named English Socialism (shortened to "Ingsoc" in Newspeak, the government's invented language). The superstate is under the control of the privileged, elite Inner Party. The Inner Party persecutes individualism and independent thinking known as "thoughtcrimes" and is enforced by the "Thought Police".
Nineteen Eighty-Four has been adapted for the cinema, radio, television and theatre at least twice each, as well as for other art media, such as ballet and opera.
In 1954 the BBC made an adaptation for television with Peter Cushing playing Winston Smith. The watchful eyes of Big Brother were portrayed by the design department's Roy Oxley. The programme caused a stir, and questions were asked in Parliament.
But at around the time and location the author had in mind, April to June 1984 in London, a major blockbuster motion picture was shot, starring John Hurt as Smith and Richard Burton as O'Brien, his last role, with music by the Eurythmics. The film was released in Europe 14 November 1984 and the US 17 February the following year—or so we are told. What is certain the tagline “Big Brother is watching you” has grown into popular culture, a common household name and far beyond.

In the decades since the publication of Nineteen Eighty-Four, there have been numerous comparisons to the Aldous Huxley's novel Brave New World, which had been published 17 years earlier, in 1932. They are both predictions of societies dominated by a central government and are both based on extensions of the trends of their times. However, members of the ruling class of Nineteen Eighty-Four use brutal force, torture and mind control to keep individuals in line, but rulers in Brave New World keep the citizens in line by addictive drugs and pleasurable distractions.
In October 1949, after reading Nineteen Eighty-Four, Huxley sent a letter to Orwell and wrote that it would be more efficient for rulers to stay in power by the softer touch by allowing citizens to self-seek pleasure to control them rather than brute force and to allow a false sense of freedom:
“Within the next generation I believe that the world's rulers will discover that infant conditioning and narco-hypnosis are more efficient, as instruments of government, than clubs and prisons, and that the lust for power can be just as completely satisfied by suggesting people into loving their servitude as by flogging and kicking them into obe.dience.”
Elements of both novels can be seen in modern-day societies, with Huxley's vision being more dominant in the West and Orwell's vision more prevalent with dictators in ex-communist countries and the theocracies and the dictatorships of the Middle East, as is pointed out in essays that compare the two novels, including Huxley's own Brave New World Revisited. However, that assessment was reconsidered in 2017 with the presidency of Donald Trump and the associated burst in popularity of Orwell's novel.

Lord of the Flies

Of Mice and Men

, better known by his pen name