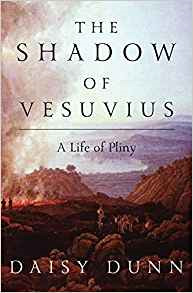 The Shadow of Vesuvius: A Life of Pliny

“A wonderfully rich, witty, insightful, and wide-ranging portrait of the two Plinys and their world.”―Sarah Bakewell, author of How to Live

When Pliny the Elder perished at Stabiae during the eruption of Vesuvius in 79 AD, he left behind an enormous compendium of knowledge, his thirty-seven-volume Natural History, and a teenaged nephew who revered him as a father. Grieving his loss, Pliny the Younger inherited the Elder’s notebooks―filled with pearls of wisdom―and his legacy.
At its heart, The Shadow of Vesuvius is a literary biography of the younger man, who would grow up to become a lawyer, senator, poet, collector of villas, and chronicler of the Roman Empire from the dire days of terror under Emperor Domitian to the gentler times of Emperor Trajan.
A biography that will appeal to lovers of Mary Beard books, it is also a moving narrative about the profound influence of a father figure on his adopted son. Interweaving the younger Pliny’s Letters with extracts from the Elder’s Natural History, Daisy Dunn paints a vivid, compellingly readable portrait of two of antiquity’s greatest minds.

Readers Also Enjoyed The Shadow of Vesuvius: A Life of Pliny

Philip and Alexander: Kings and Conquerors

No One Is Too Small to Make a Difference

The Children of Ash and Elm: A History of the Vikings

The Map of Knowledge: How Classical Ideas Were Lost and Found: A History in Seven Cities

Alaric the Goth: An Outsider's History of the Fall of Rome

Alexander the Great: His Life and His Mysterious Death

The Letters of the Younger Pliny

The Uninhabitable Earth: Life After Warming

The Shadow of Vesuvius: A Life of Pliny Reviews

Who Made the Stars?: Little Bear's Bedtime Question Rastløs Alekzandre: Volumul 1 Accidental Hero พันสารท เล่ม 3 Intermittent Fasting for Dummies Crowned by Fate IN TUNE WITH THE INFINITE MIND: Plug into the power of the Cosmos and make things better When Will There Be Good News? Rick Steves' Postcards from Europe: 25 Years of Travel Tales from America's Favorite Guidebook Writer