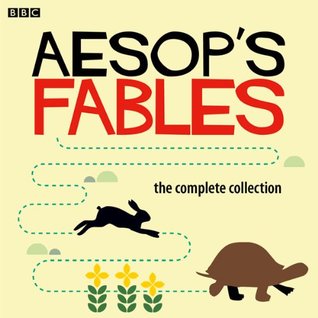 The Hare and the Tortoise
The Frogs and the Ox
The Fox and the Crow
The Monkey as King
The Bundle of Sticks
The Gnat and the Lion
The North Wind and the Sun
The Fox and the Grapes
The Dog, the Cockerel and the Fox
The Miller, His Son and the Donkey
The Wolf and the Heron
The Donkey in the Lion's Skin
The Ant and the Grasshopper
The Vain Jackdaw
The Frogs who Wanted a King
The Cat and the Mice
The Lion and the Mouse
The Caged Bird and the Bat
The Fox and the Goat
The Lion and the Elephant
The Crow and the Pitcher
The Fox and the Stork/Two Travellers and a Bear
The Goose that Laid the Golden Eggs
The Kid and the Wolf
The Old Lion and the Fox
The Eagle and the Jackdaw
The Wolf in Sheep's Clothing
The Goatherd and the Wild Goats
The Dog in the Manger
Androcles and The Lion, plus 9 more.
©2012 AudioGO Ltd (P)2012 AudioGO Ltd

My Ladybird Book Of 10 Storytime Tales

The Butterfly Ball And The Grasshopper's Feast

Shark In The Park

Aesop (/ˈiːsɒp/ ee-sop; Ancient Greek: Αἴσωπος, Aisōpos, c. 620–564 BCE) was an Ancient Greek fabulist or story teller credited with a number of fables now collectively known as Aesop's Fables. Although his existence remains uncertain and (if they ever existed) no writings by him survive, numerous tales credited to him were gathered across the centuries and in many languages in a storytelling trad