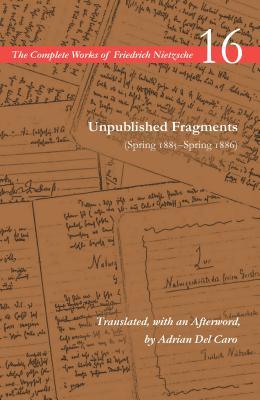 This volume of The Complete Works provides the first English translation of all Nietzsche's unpublished notes from April 1885 to the summer of 1886, the period in which he wrote his breakthrough philosophical books Beyond Good and Evil and On the Genealogy of Morality. Keen to reinvent himself after Thus Spoke Zarathustra, the philosopher used these unpublished notes to chart his search for a new philosophical voice. The notebooks contain copious drafts of book titles; critical retrospection on his earlier projects; a critique of the feminine; prophetic commentary on Germany; and forays into metaphysics, epistemology, ethics, aesthetics, and language. They also reveal his deep concern for Europe and its future and a burgeoning presence of the Dionysian. We learn what Nietzsche was reading and from whom he borrowed, and we find a considerable portion of notes and fragments from the non-book Will to Power, though here they are unembellished and unmediated. Richly annotated and accompanied by a detailed translator's afterword, this landmark volume sheds light on the controversy surrounding the Nachlass of the 1880s.

When Men Behave Badly: The Hidden Roots of Sexual Deception, Harassment, and Assault

The Fantastic: A Structural Approach to a Literary Genre

Of the Standard of Taste and Other Essays

Noise: A Flaw in Human Judgment

St Petersburg Dialogues: Or Conversations on the Temporal Government of Providence

Friedrich Wilhelm Nietzsche was a German philosopher of the late 19th century who challenged the foundations of Christianity and traditional morality. He was interested in the enhancement of individual and cultural health, and believed in life, creativity, power, and the realities of the world we live in, rather than those situated in a world beyond. Central to his philosophy is the idea of “life-