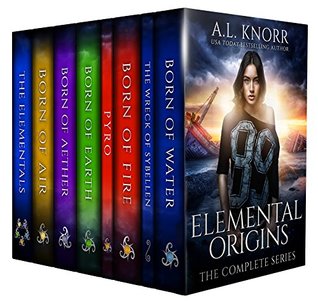 Limited Time Offer of only .99US! Normally $9.99! Grab yours today before it goes back to full price!

This box set includes all six books in The Elemental Origins Series by USA Today bestselling author AL Knorr and is 2000 pages of elemental magic, adventure, friendship and romance that will keep you reading late into the night. Don't miss these stories readers are calling their 'new favorite'!

Born of Water: A mysterious shipwreck could unlock ancient powers... or send her to a watery grave.

Targa MacAuley feels more at home on dry land than in the realm of her mermaid ancestors. To keep her mom's identity under wraps, Targa signs on for a salvage in the Baltic Sea. Her plan to blend in with the crew is spoiled when she catches the eye of a handsome local.

A freak accident attracts even more unwanted attention, putting their lives in danger. Can Targa find the courage to unleash the currents surging deep within?

Born of Fire: Welcome to the world of fire magi, where what doesn't kill you (literally) makes you stronger.

Saxony Cagney counts herself lucky when she wins a position in Venice for the summer. She meets two Italian men.... Both are smart, successful, and sexy. When she discovers one of the boys in her charge is dying, things get a shoved into complicated...then contagious - she'll never be the same.

Just when she's got more than she can handle, she gets tangled with the most powerful crime family in Venice. Will she survive long enough to learn the secrets of her new abilities, or will they kill her? Born of Earth: When the earth gives up her dead, you shall understand.

Georjie isn’t thrilled about going to Ireland for the summer, and even less thrilled when her sexy cousin Jasher (not blood-related and don't you forget it) is as friendly as a nest of vipers.

When Georjie unearths Jasher's terrifying secret, things she never knew about her family come to light; A woman who disappeared without a trace. A desiccated body. Strange cocoons hanging in the greenhouse. Georjie finds herself trapped in a mystery involving the power of nature itself.

Born of Aether: They say if you tell a lie long enough, you'll eventually believe it, but Akiko will never forget who she really is.

Akiko's life as a teen is a complete sham. The old man she lives with is not her grandfather, he's her captor. And Akiko isn't a teen. In fact, she isn't even human. But Akiko isn't allowed to share her truth with a soul. Not even her friends know the power she could wield.

When she's sent to steal a sword, she jumps at the chance to secure her freedom, only to get caught in a game with the most deadly crime syndicate in Japan.

Can Akiko escape with her life, or is true freedom as elusive as the Aether she was born from?

Born of Air: She is a supernatural unlike any you've ever seen before.

All Petra wants in life is to study Archaeology. She's got the grades and ambition, all she needs now is work on an Old World dig. When Petra spies an ad for an excavation to Africa, she knows its for her.

A heart-pounding race through the desert with Jesse-her sexy dig-mate-ends when she falls into a cave where her life changes forever.

As her powers manifest, there are those who have reason to destroy her. Will she survive long enough to learn what she's really capable of?

The Elementals: Can they use their newfound powers to save their hometown?

The summer is over and the girls share the adventures that have gifted them with elemental powers.

Tales of the Feisty Druid Omnibus (Books 1-7): (The Arcadian Druid, The Undying Illusionist, The Frozen Wasteland, The Deceiver, The Lost, The Damned, Into The Maelstrom)