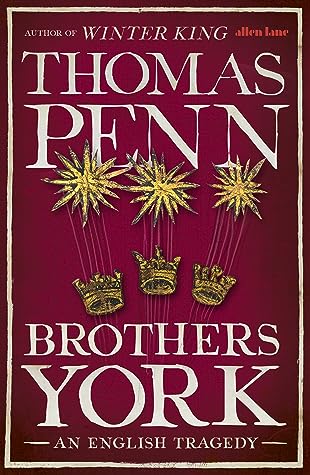 The Brothers York: An English Tragedy

In early 1461, a seventeen-year-old boy won a battle on a freezing morning in the Welsh marches, and claimed the crown of England as Edward IV, first king of the usurping house of York. It was a time when old certainties had been shredded: by popular insurgency, economic crisis, feuding and a corrupt, bankrupt government presided over by the imbecilic, Lancastrian King Henry VI. The country was in need of a new hero. Magnetic, narcissistic, Edward found himself on the throne, and alongside him his two younger brothers: the unstable, petulant George, Duke of Clarence, and the boy who would emerge from his shadow, Richard, Duke of Gloucester.

Charismatic, able and ambitious, the brothers would become the figureheads of a spectacular ruling dynasty, one that laid the foundations for a renewal of English royal power. Yet a web of grudges and resentments grew between them, generating a destructive sequence of conspiracy, rebellion, deposition, fratricide, usurpation and regicide. The house of York's brutal end came on 22August 1485 at Bosworth Field, with the death of the youngest brother, now Richard III, at the hands of a new usurper, Henry Tudor.

Brothers York is the story of three remarkable brothers, two of whom were crowned kings of England and the other an heir presumptive, whose antagonism was fuelled by the mistrust and vendettas of the age that brought their family to power. The house of York should have been the dynasty that the Tudors became. Its tragedy was that it devoured itself.

Henry VIII: And the Men Who Made Him

A History of Women's Lives on the Isle of Wight

The House of Brides

Shadow King: The Life and Death of Henry VI

The Boy Who Made the World Disappear

A Century of Votes for Women: American Elections Since Suffrage