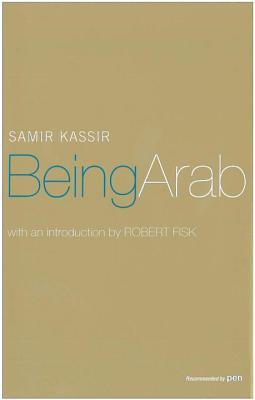 Being Arab is a brilliant exploration of the current political and intellectual stagnation of the Arab world, by one of its most prominent journalists.

In explaining how the region arrived at this point, Kassir turns to the past, revisiting the Arab “golden age,” the extraordinary nineteenth-century flowering of cultural expression that continued into the twentieth as, from Cairo to Baghdad and from Beirut to Casablanca, painters, poets, musicians, playwrights and novelists came together to create a new, living Arab culture. Considering the huge impact of modernity on the region, and the accompanying shockwaves that turned society upside-down, Kassir states that the current crisis in Arab identity lies in the failure to come to terms with modernity, turning instead to false solutions such as pan-Arabism and Islamism.

Being Arab is a clarion call, urging Arabs to embrace their own history, to reject Western double standards and Islamism alike, and to take the future of the region into their own hands.

The Morning They Came for Us: Dispatches from Syria

The Missionary Position: Mother Teresa in Theory and Practice

In Other Rooms, Other Wonders

Some Thoughts on the Common Toad

Our Women on the Ground: Essays by Arab Women Reporting from the Arab World

The Cheese and the Worms: The Cosmos of a Sixteenth-Century Miller

Shadowplay: Behind the Lines and Under Fire: The Inside Story of Europe's Last War

The Language of Cities

Samir Kassir was Lebanese professor of history at Saint-Joseph University and journalist.Born to a Palestinian father and a Syrian mother.Kassir received his degree in philosophy and political philosophy in 1984, in 1990, Kassir earned his PhD in Modern History also from the University of Sorbonne.He held both Lebanese and French nationality. A prominent left-wing activist, he was a strong advocat