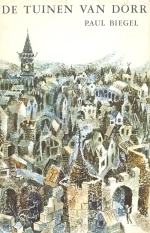 I due gemelli veneziani

Paul Biegel was born in Bussum in 1925. His father, Hermann Biegel, was of German descent, and owned a building materials shop. With his wife Madeleine Povel-Guillot he had nine children, six girls and three boys, of which Paul was the youngest. He wasn't a prolific reader as a child, preferring to play outside. His favourite books where the fairy tales of the brothers Grimm and the works of Jules