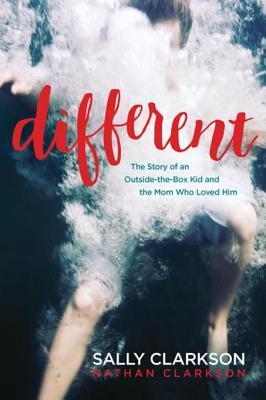 Different: The Story of an Outside-The-Box Kid and the Mom Who Loved Him

Nathan was different and Sally knew it.
From his early childhood, Nathan was bursting with creativity and uncontainable energy, struggling not only with learning issues but also with anxiety and OCD. He saw the world through his own unique lens--one that often caused him to be labeled as "bad," "troubled," or someone in need of "fixing."

Bravely choosing to listen to her motherly intuition rather than the loud voices of the world, Sally dared to believe that Nathan's differences could be part of an intentional design from a loving Creator with a plan for his life. She trusted that the things that made him different were the very things that could make him great.

Join Sally and Nathan as they share their stories from a personal perspective as mother and son. If you are in need of help and hope in your own journey with an outside-the-box child, or if you're an adult trying to make sense of your differences, you'll find deep insight, resonance, and encouragement in the pages of this book. Dare to love and nurture the "different" one in your life.

Readers Also Enjoyed Different: The Story of an Outside-The-Box Kid and the Mom Who Loved Him

Desperate: Hope for the Mom Who Needs to Breathe

The Lifegiving Parent: Giving Your Child a Life Worth Living for Christ

The Call of the Wild and Free: Reclaiming Wonder in Your Child's Education

Missional Motherhood: The Everyday Ministry of Motherhood in the Grand Plan of God

Teaching from Rest: A Homeschooler's Guide to Unshakable Peace

Adventuring Together: How to Create Connections and Make Lasting Memories with Your Kids

Different: The Story of an Outside-The-Box Kid and the Mom Who Loved Him Reviews

The City Dragon's Mate Mark Manson on Self-Knowledge My Friends And I Were Granted Three Wishes By A Cat Goddess And I Swear I Got Distracted When My Turn Came Around (Cat Wishes) Unexpected The Mortal Messiah: From Bethlehem to Calvary, Book 4 دنانير لبلبة Citizen Soldiers: The US Army from the Normandy Beaches to the Bulge to the Surrender of Germany Dragon Elite Te regalo mi corazón Cold Blooded Lover

From working on college campuses, to sharing the Gospel behind the Iron Curtain as a missionary, traveling around the United States, Canada, Europe, the Middle East, Asia, and Australia to speak on discipleship, Sally Clarkson has tenaciously sought after God's kingdom, and has used her ministry to encourage others to do the same. From her best-selling books such as Own Your Life, Desperate (with