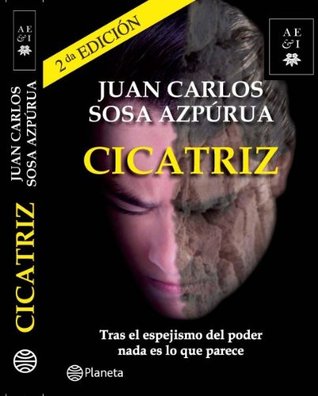 How do you define Power? What hides behind appearances? Who are the puppets and who the puppeteers? Different events which are apparently unconnected start building a network that reveals some of the truths of our contemporary world, and the secrets hiding behind its lies.
In his debut as fiction writer, the internationally renowned energy and politics analyst Juan Carlos Sosa-Azpúrua, traps readers within unexpected situations that span corruption, love, vengeance, deceit and redemption, masterfully describing how international centers of power work. An intricate puzzle is slowly put together, which is completed once the intimate workings and thoughts of the novel´s characters are revealed.
"Like Sartre and Malraux, Sosa´s skillful dialectic language -he´s an analyst of the human mind- proposes in Cicatriz a way out of human angst", Jorge Gómez Mantellini - Zeta magazine.
"Cicatriz is the metaphor that explains how a country [Venezuela] and its people take on the cultural suicide of their institutions ... The narrative is cosmopolitan ... properly used for the first time with skill, congruence and responsibility by a Venezuelan writer", Alexis Romero - Papel Literario/El Nacional newspaper.