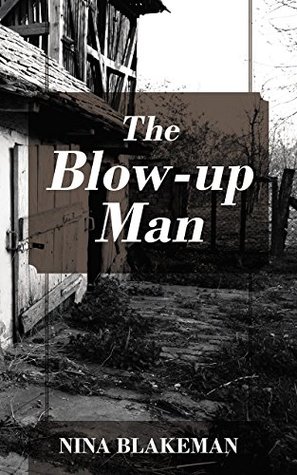 The Blow-Up Man is a psychological thriller that takes place in a dispirited region of West Texas. It is where pests, weeds, predators, and strong winds make living in the region a burden to most. West Texas is not a place for the weak …or a naive, young woman with a head full of fantasy. Abandoned homesteads along the barren countryside represent the many dreams that didn’t come true, but the nightmares that did. In the middle of the vast rural region is Ethanville, an agrarian town of 100,000. It is an unlikely place to find a university. A barbed wire fence is all that separates the institution of higher learning from the adjacent grazing land. Inside the hallowed halls of Cullen State University is where Faye Brady falls in love. Thirty-year-old Faye has lived a sheltered life. With a deceased father, and an emotionally detached mother, Faye exists in a world derived from the imagination of the many authors she’s read …and falling in love means living happily ever after. Life without a father has left Faye with many unresolved issues. They’re major contributors to her falling long and hard for her older mentor, Dr. Todd Davis. Dr. Todd Davis is a well-respected researcher in the area of pharmaceutical sciences, and it’s under his direction that Faye earns her PhD. He’s handsome, and his intellect, experience, and confidence are all powerful enticements that draw Faye into his world. Faye’s mother, Madeline Brady, is concerned about her daughter’s relationship with Todd. Faye interprets her concerns as intrusive, but its Todd’s age and baggage that cause Madeline to worry. Fourteen years ago, Todd had a relationship with a woman named Annette Dolce. Annette has father issues of her own. But unlike Faye, she’s impulsive, manipulative, and dangerous. She’s also the mother of Todd’s twin girls. The girls are on the cusp of adolescence, and even though the twins are identical, their personalities have diverged in two separate directions. Emma is most like her mother, and in Annette’s eyes, Emma can do no wrong. Ella is quiet, reserved, and serious. It is Ella who is often the target of her mother’s displaced anger. When things get overwhelming at home, Ella seeks refuge down the road at the home of Margaret Carson. More than once, the widowed neighbor proves herself to be Ella’s champion against the vengeful mother. Todd doesn’t want to believe that Annette is all bad. To do that, he has to face that he gave his children that kind of mother. The righteous Todd will do whatever it takes for his children to believe in family; however, it’s his loneliness that pushes him towards the younger Faye. He wants to build a life with her. When Todd informs Annette of his decision to marry Faye, the psychologically disturbed Annette is pushed to the edge. Faye is frightened of Annette … and she should be. The world of books has left Faye totally unprepared to deal with Annette. Does Faye have what it takes to overcome the toxic mistakes of Todd’s past, and the nightmare that is about to come true?

The Babysitter: My Summers with a Serial Killer

The Women in Black

Zerberu Fantastic Four (2018-) #1 Baby Cheetahs Beyond the Catechist's Toolbox: Catechesis That Not Only Informs, but Transforms A Meal with Jesus: Discovering Grace, Community, and Mission Around the Table Guardians of the Galaxy #3 The Good Samaritan Second-Chance Cowboy Trace Shapes Workbook, Grades Preschool - K The House that Cleans Itself: Creative Solutions for a Clean and Orderly House in Less Time Than You Can Imagine

Nina Blakeman, BSN, PhD is an experienced professional who takes her knowledge of the biomedical field to the fictional realm. Her thrillers are meant to unhinge the reader's sense of well-being. She lives in West Texas with her husband, Scot, and their three dogs. She enjoys classic rock, golf, a good suspense novel, and the Green Bay Packers. She’s the author of Blind Vision, as well as the Faye