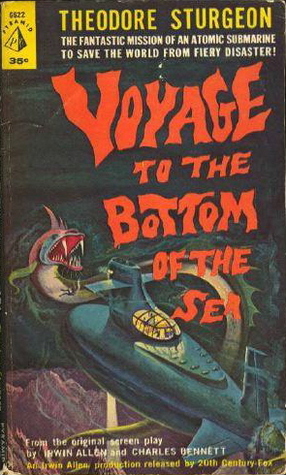 Voyage To The Bottom Of The Sea

From a flaming sky, heat seared Earth's surface and cast forests and mighty cities flared and died. In a few weeks, mankind would be burned from the face of the planet.

There was only one desperate chance--and only one man desperate enough to take it--Nelson, the "Mad Admiral". Defying his government and the nations of the world, Nelson drove the giant atomic submarine Seaview halfway around the globe to a grim rendezvous with Destiny. Unknown monsters of the deep barred his way--foreign warships hunted him--sabotages delayed him--but Nelson bulled and slashed his way through. Then, at the crucial moment, when disaster struck and the world seemed doomed, Admiral Nelson launched his mad plan!

Readers Also Enjoyed Voyage To The Bottom Of The Sea

Days of Obligation: An Argument With My Mexican Father

The Man on the Balcony (Martin Beck, #3)

Voyage To The Bottom Of The Sea Reviews

Theodore Sturgeon (1918–1985) is considered one of the godfathers of contemporary science fiction and dark fantasy. The author of numerous acclaimed short stories and novels, among them the classics More Than Human, Venus Plus X, and To Marry Medusa, Sturgeon also wrote for television and holds among his credits two episodes of the original 1960s Star Trek series, for which he created the Vulcan m