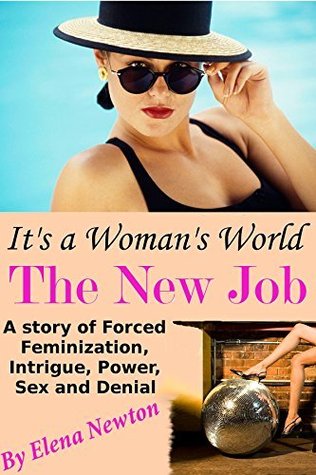 It's A Woman's World - The New Job: A Story of Forced Feminization, Intrigue, Power, Sex and Denial

Peter is a guy who needs a job, badly. He’s been out of work for several months, money is getting short and credit card bills are getting big. His wife, Christine, is putting on the pressure. Then all the sudden it looks like some good luck has come his way. Christine has found a job opening advertised in a women’s magazine.

He interviews, only to face a series of difficult and confusing conditions which push him towards feminization. The company requires his immediate agreement or the loss of his job. His compromises are constantly portrayed and documented as "his" requests granted by management. And he finds himself writing down “notes” and memos that put him in a worse and worse position and emphasize how willingly he submits to his feminization.
He’s Required to Cross-dress and Faces Constant Humiliation

It's forced feminization. In order to get this job, which does advertise good pay and benefits, Peter is relentlessly pushed into a corner. It starts with “neutral” clothing which can’t include men’s clothes, and swiftly goes from there to being forced to wear g-strings and bras and called "girl" at every opportunity. His job seems to consist mainly of distributing flowers, handing out coffee and other submissive functions.
He’s Made into “One of the Girls”

Peter is expected to undress in the presence of the women of the office. They touch him freely in the most intimate places. And then he’s disciplined for showing off his inadequate “member,” leading to his greatest humiliation yet, a chastity cage. He’s given perfume to wear and unlabeled vitamins to take…
A Woman’s World, Inc., Markets to Women – Although What they Sell Isn’t Clear

Peter isn’t told exactly what products or services AWWI provides, and the people identified as clients are silent, wistful, and kept out of sight. Peter just knows he’ll have to know all of the female products from experience, and he finds himself dressed in g-strings, bras and heels, all while being reassured that they are as gender-neutral as possible…

Christine, who hadn’t been very sexual with Peter for years, suddenly begins to initiate hot sex. It can get desperate and uncomfortable for Peter, and her delight in squeezing his balls and making him ask her to hurt him keeps him off guard. But he does find her new assertiveness attractive nonetheless.
It’s a Woman’s World – The New Job”

The New Job is a story of forced feminization, intrigue, power, sex and denial. It’s the first in a series that explores what happens when Peter takes a job with a marketing firm that specializes in serving women and immediately start to feminize Peter so that he can “fit in.” People interested in psychology will recognize echoes of Cialdini's book, Influence as the company ruthlessly uses brainwashing techniques to force Peter further and further out of his comfort zone.

Readers Also Enjoyed It's A Woman's World - The New Job: A Story of Forced Feminization, Intrigue, Power, Sex and Denial

From Submission to Dominance: A journey of obsession and sexual deviation

Purrfect Heat (The Mysteries of Max #4)

Lyon on a Leash

It's A Woman's World - The New Job: A Story of Forced Feminization, Intrigue, Power, Sex and Denial Reviews