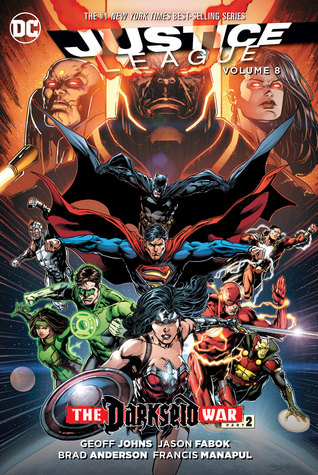 The concluding volume of Geoff Johns and Jason Fabok's best-selling epic is here!
Darkseid is dead! In the midst of the Lord of Apokolips being slain at the hands of the Anti-Monitor, the Justice League has inherited the power of the Gods! Batman, Superman, The Flash, Shazam and Green Lantern have been transformed into omnipotent deities, but even when equipped with such power, still need help in defeating their most powerful foe to date. Their unlikely allies? The villainous Crime Syndicate!
Featuring spectacular art by Jason Fabok and Francis Manapul!
Collecting: Justice League 45-50, & Darkseid War Special

Batman, Volume 3: Death of the Family

Batman, Volume 3: I Am Bane

Batman, Volume 2: I Am Suicide

A Cuddly Toy A Life on the Road ஊழ்: Oozh Persona normal Тоня Ґліммердал The Anmorian Legends: Wrath of the Exiled The Standing Meditation: Excel In The Modern World Using An Ancient Practice Clockwork Stars Men Of The Bitch Series And The Women Who Love Them (Men Of Bitch Series Book 3) Scars and Sins

Geoff Johns originally hails from Detroit, Michigan. He attended Michigan State University, where he earned a degree in Media Arts and Film. He moved to Los Angeles in the late 1990s in search of work within the film industry. Through perseverance, Geoff ended up as the assistant to Richard Donner, working on Conspiracy Theory and Lethal Weapon 4. During that time, he also began his comics career