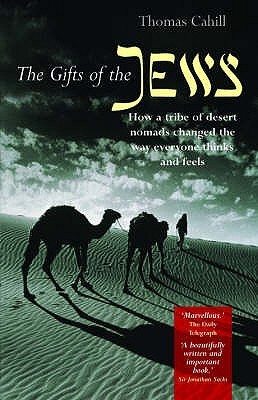 The Gifts of the Jews: How a Tribe of Desert Nomads Changed the Way Everyone Thinks and Feels

An enchanting journey into history, recreating a time when the actions of a small band of people had repercussions that are still felt today.

The author of the runaway bestseller How the Irish Saved Civilization has done it again. In The Gifts of the Jews Thomas Cahill takes us on another enchanting journey into history, once again recreating a time when the actions of a small band of people had repercussions that are still felt today.

The Gifts of the Jews reveals the critical change that made western civilization possible. Within the matrix of ancient religions and philosophies, life was seen as part of an endless cycle of birth and death; time was like a wheel, spinning ceaselessly. Yet somehow, the ancient Jews began to see time differently. For them, time had a beginning and an end; it was a narrative, whose triumphant conclusion would come in the future. From this insight came a new conception of men and women as individuals with unique destinies--a conception that would inform the Declaration of Independence--and our hopeful belief in progress and the sense that tomorrow can be better than today. As Thomas Cahill narrates this momentous shift, he also explains the real significance of such Biblical figures as Abraham and Sarah, Moses and the Pharaoh, Joshua, Isaiah, and Jeremiah.

Full of compelling stories, insights and humor, The Gifts of the Jews is an irresistible exploration of history as fascinating and fun as How the Irish Saved Civilization.

Readers Also Enjoyed The Gifts of the Jews: How a Tribe of Desert Nomads Changed the Way Everyone Thinks and Feels

Reading While Black: African American Biblical Interpretation as an Exercise in Hope

Mysteries of the Middle Ages: The Rise of Feminism, Science and Art from the Cults of Catholic Europe

Love Wins: A Book About Heaven, Hell, and the Fate of Every Person Who Ever Lived

Sailing the Wine-Dark Sea: Why the Greeks Matter

What Is the Bible?: How an Ancient Library of Poems, Letters, and Stories Can Transform the Way You Think and Feel About Everything

The Deeply Formed Life: Five Transformative Values to Root Us in the Way of Jesus

Everything Is Spiritual: Who We Are and What We're Doing Here

The Gifts of the Jews: How a Tribe of Desert Nomads Changed the Way Everyone Thinks and Feels Reviews

Zerberu Fantastic Four (2018-) #1 Baby Cheetahs Beyond the Catechist's Toolbox: Catechesis That Not Only Informs, but Transforms A Meal with Jesus: Discovering Grace, Community, and Mission Around the Table Guardians of the Galaxy #3 The Good Samaritan Second-Chance Cowboy Trace Shapes Workbook, Grades Preschool - K The House that Cleans Itself: Creative Solutions for a Clean and Orderly House in Less Time Than You Can Imagine

Born in New York City to Irish-American parents and raised in Queens and the Bronx, Cahill was educated by Jesuits and studied ancient Greek and Latin. He continued his study of Greek and Latin literature, as well as medieval philosophy, scripture and theology, at Fordham University, where he completed a B.A. in classical literature and philosophy in 1964, and a pontifical degree in philosophy in