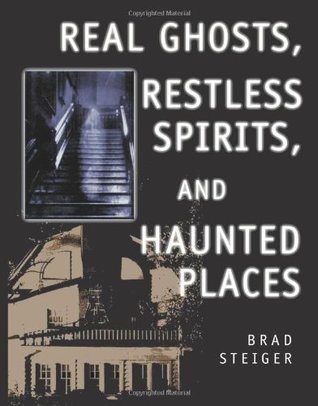 Ancient philosophers suggested that the appearance of spirits is evidence that we are part of a larger community of intelligences, a universe of interrelated species, both physical and nonphysical. Master ghost hunter and best-selling author Brad Steiger invites you to join him as he explores the many dark and nightmarish pathways leading to this shadowy world of spirits and hauntings.

Real Ghosts, Restless Spirits, and Haunted Places is a defining work on spirit phenomena. The culmination of Steiger's 50 years of paranormal research, Real Ghosts is a bold telling of true ghost stories and first-person encounters. It is also a comprehensive classification of the spirit world touching on time travel and parallel universes, presenting the full range of ghostly manifestations and haunted locations. A major work sure to be heralded by paranormal enthusiasts (whatever their corporeal state), Real Ghosts is organized into 30 topical chapters, including:

Did you know that ghosts still haunt Ohio's State Reformatory, otherwise known as Shawshank? Or that the Hollywood Roosevelt Hotel is home to some of the most famous ghosts in the world? With Real Ghosts, you'll discover that Abe Lincoln regularly consulted "spooks" and mediums, Rudolph Valentino haunts his old mansion, and the ghosts of Anne Boleyn, Henry VIII, Katharine Howard, Jane Seymour, Elizabeth I, and King George III all still haunt some of England's most famous castles. You'll also learn how to perform a cleansing ritual to rid your home of unwanted spectral visitors. More than 125 illustrations grace the pages, many of them from private collections. Plus, Real Ghosts provides several appendices, including a full bibliography, selected filmography, a list of North American localities heavily populated by ghosts, and a special section on ghost hunters, researchers, and general resources.

The World's Most Haunted Places: From the Secret Files of Ghostvillage.com

Ghosts: True Encounters from the World Beyond

The Myrtles Plantation: The True Story of America's Most Haunted House

Ghosts Among Us: True Stories of Spirit Encounters

The Encyclopedia of Ghosts and Spirits