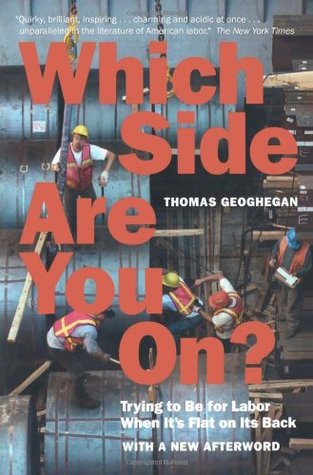 Which Side Are You On?: Trying to Be for Labor When It's Flat on Its Back

When it first appeared in hardcover, Which Side Are You On? received widespread critical accolades, and was nominated for a National Book Critics Circle Award for nonfiction. In this new paperback edition, Thomas Geoghegan has updated his eloquent plea for the relevance of organized labor in America with an afterword covering the labor movement through the 1990s. A funny, sharp, unsentimental career memoir, Which Side Are You On? pairs a compelling history of the rise and near-fall of labor in the United States with an idealist's disgruntled exercise in self-evaluation. Writing with the honesty of an embattled veteran still hoping for the best, Geoghegan offers an entertaining, accessible, and literary introduction to the labor movement, as well as an indispensable touchstone for anyone whose hopes have run up against the unaccommodating facts on the ground. Wry and inspiring, Which Side Are You On? is the ideal book for anyone who has ever woken up and realized, "You must change your life."

Readers Also Enjoyed Which Side Are You On?: Trying to Be for Labor When It's Flat on Its Back

In Defense of Food: An Eater's Manifesto

Where Men Win Glory: The Odyssey of Pat Tillman

Fish!: A Remarkable Way to Boost Morale and Improve Results

Complexity and the Economy

City of the Century: The Epic of Chicago and the Making of America

Turn the Ship Around!: A True Story of Turning Followers into Leaders

Which Side Are You On?: Trying to Be for Labor When It's Flat on Its Back Reviews