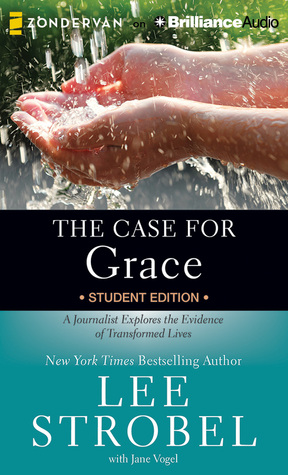 The Case for Grace Student Edition, The: A Journalist Explores the Evidence of Transformed Lives

In The Case for Grace Student Edition, Lee Strobel and Jane Vogel present a compelling and highly personal experiential case for God, focusing on God’s transforming work in the lives of people today.

Writing with unusual candor, Lee draws upon his own journey from atheism to Christianity to explore the depth and breadth of God’s redeeming love, including those whose lives have been radically changed after discovering the “how” and “why” behind God’s amazing grace. You’ll encounter racists, addicts, and even murderers who have found new hope and purpose. You’ll meet once-bitter people who have learned to forgive those who have harmed them—and, equally amazing, people mired in guilt who have discovered that they can even forgive themselves.

Through it all, you will see how God’s grace can change your eternity and relationships…starting today.

Readers Also Enjoyed The Case for Grace Student Edition, The: A Journalist Explores the Evidence of Transformed Lives

The Purpose Driven Life: What on Earth Am I Here for?

The Abolition of Man

The Prodigal God: Recovering the Heart of the Christian Faith

The Reason for God: Belief in an Age of Skepticism

The Case for the Real Jesus---Student Edition: A Journalist Investigates Current Challenges to Christianity

Experiencing God: Knowing and Doing the Will of God, Workbook

Battlefield Of The Mind: Winning The Battle In Your Mind

The Case for Grace Student Edition, The: A Journalist Explores the Evidence of Transformed Lives Reviews

Lee Patrick Strobel is an American Christian author, journalist, apologist and pastor. He has written several books, including four which received ECPA Christian Book Awards (1994, 1999, 2001, 2005) and a series which addresses challenges to a Biblically inerrant view of Christianity. Strobel also hosted a television program called Faith Under Fire on PAX TV, and runs a video apologetics web site.