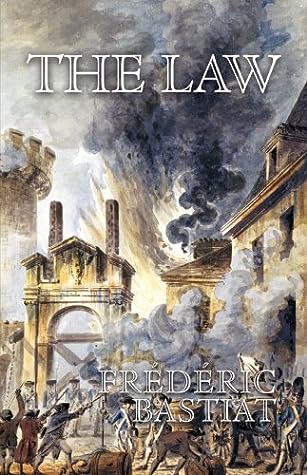 How is it that the law enforcer itself does not have to keep the law? How is it that the law permits the state to lawfully engage in actions which, if undertaken by individuals, would land them in jail? These are among the most intriguing issues in political and economic philosophy. More specifically, the problem of law that itself violates law is an insurmountable conundrum of all statist philosophies. The problem has never been discussed so profoundly and passionately as in this essay by Frederic Bastiat from 1850. The essay might have been written today. It applies in ever way to our own time, which is precisely why so many people credit this one essay for showing them the light of liberty. Bastiat's essay here is timeless because applies whenever and wherever the state assumes unto itself different rules and different laws from that by which it expects other people to live. And so we have this legendary essay, written in a white heat against the leaders of 19th century France, the reading of which has shocked millions out of their toleration of despotism. This new edition from the Mises Institute revives a glorious translation that has been out of print for a hundred years, one that circulated in Britain in the generation that followed Bastiat's death. This newly available translation provides new insight into Bastiat's argument. It is a more sophisticated, more substantial, and more precise rendering than any in print. The question that Bastiat deals with: how to tell when a law is unjust or when the law maker has become a source of law breaking? When the law becomes a means of plunder it has lost its character of genuine law. When the law enforcer is permitted to do with others' lives and property what would be illegal if the citizens did them, the law becomes perverted. Bastiat doesn't avoid the difficult issues, such as why should we think that a democratic mandate can convert injustice to justice. He deals directly with the issue of the expanse of legislation: It is not true that the mission of the law is to regulate our consciences, our ideas, our will, our education, our sentiments, our sentiments, our exchanges, our gifts, our enjoyments. Its mission is to prevent the rights of one from interfering with those of another, in any one of these things. Law, because it has force for its necessary sanction, can only have the domain of force, which is justice. More from Bastiat's The Law: Socialism, like the old policy from which it emanates, confounds Government and society. And so, every time we object to a thing being done by Government, it concludes that we object to its being done at all. We disapprove of education by the State - then we are against education altogether. We object to a State religion - then we would have no religion at all. We object to an equality which is brought about by the State then we are against equality, etc., etc. They might as well accuse us of wishing men not to eat, because we object to the cultivation of corn by the State. How is it that the strange idea of making the law produce what it does not contain - prosperity, in a positive sense, wealth, science, religion - should ever have gained ground in the political world? The modern politicians, particularly those of the Socialist school, found their different theories upon one common hypothesis; and surely a more strange, a more presumptuous notion, could never have entered a human brain. They divide mankind into two parts. Men in general, except one, form the first; the politician himself forms the second, which is by far the most important. Whether you buy one or one hundred, you can look forward to one of the most penetrating and powerful essays written in the history of political economy.

Human Action: A Treatise on Economics

I, Pencil: My Family Tree As Told to Leonard E. Read

What Has Government Done to Our Money? and The Case for a 100 Percent Gold Dollar

Economic Calculation in the Socialist Commonwealth

Amazing Heart Rest: Why You Get More Done When You Work Less Girls Like That Paul ├Ā la campagne Chocolates from A Vampire (Misfits & Rogues Series Book 3) Negative Self-Talk and How to Change It Tomorrow in the Battle Think on Me Mistletoe in Maine Running on Red Dog Road: And Other Perils of an Appalachian Childhood The Big Stick: The Limits of Soft Power and the Necessity of Military Force