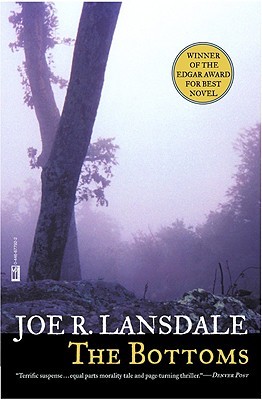 The narrator of The Bottoms is Harry Collins, an old man obsessively reflecting on certain key experiences of his childhood. In 1933, the year that forms the centerpiece of the narrative, Harry is 11 years old and living with his mother, father, and younger sister on a farm outside of Marvel Creek, Texas, near the Sabine River bottoms. Harry's world changes forever when he discovers the corpse of a young black woman tied to a tree in the forest near his home. The woman, who is eventually identified as a local prostitute, has been murdered, molested, and sexually mutilated. She is also, as Harry will soon discover, the first in a series of similar corpses, all of them the victims of a new, unprecedented sort of monster: a traveling serial killer.

From his privileged position as the son of constable (and farmer and part-time barber) Jacob Collins, Harry watches as the distinctly amateur investigation unfolds. As more bodies -- not all of them "colored" -- surface, the mood of the local residents darkens. Racial tensions -- never far from the surface, even in the best of times -- gradually kindle. When circumstantial evidence implicates an ancient, innocent black man named Mose, the Ku Klux Klan mobilizes, initiating a chilling, graphically described lynching that will occupy a permanent place in Harry Collins's memories. With Mose dead and the threat to local white women presumably put to rest, the residents of Marvel Creek resume their normal lives, only to find that the actual killer remains at large and continues to threaten the safety and stability of the town.

Lansdale uses this protracted murder investigation to open up a window on an insular, poverty-stricken, racially divided community. With humor, precision, and great narrative economy, he evokes the society of Marvel Creek in all its alternating tawdriness and nobility, offering us a varied, absolutely convincing portrait of a world that has receded into history. At the same time, he offers us a richly detailed re-creation of the vibrant, dangerous physical landscapes that were part of that world and have since been buried under the concrete and cement of the industrialized juggernaut of the late 20th century. In Lansdale's hands, the gritty realities of Depression-era Texas are as authentic -- and memorable -- as anything in recent American fiction.

The House on Abigail Lane

Children of the Dark

Champion Mojo Storyteller Joe R. Lansdale is the author of over forty novels and numerous short stories. His work has appeared in national anthologies, magazines, and collections, as well as numerous foreign publications. He has written for comics, television, film, newspapers, and Internet sites. His work has been collected in more than two dozen short-story collections, and he has edited or co-e